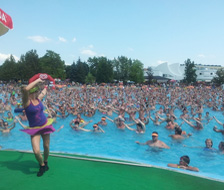 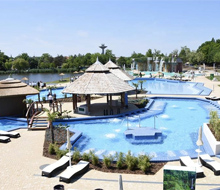 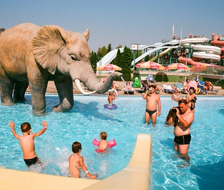 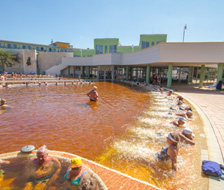 Recommended: During their lives, nearly 60-85% of the population suffers from lower back pain. The reason of the vast majority of lower back pain cases are degenerative spine diseases.

Balneo-and physiotherapy have a significant role in the treatment of chronic lower back pain. Numerous studies prove the effectiveness and long-term effect of balneotherapy and weight-bath treatment: pain reduction, improvement of mobility functions and life quality. Besidesthe physical complaints of elderly patients, it also has good effects on psychological problems.

The (osteo) arthrosis (osteoarthritis) and spondylosis belong to the degenerative musculoskeletal diseases which, as the most common joint disease group, cause severe pain and restricted mobility for the concerned and significant financial burden for society. The clinical picture becomes increasingly frequent with age, causing complaints from third to quarter of the age group above 65. Primarily, the disease affects the weight-bearing joints of lower extremities, also affecting the knees the hips and the spine.The disease has a degenerative nature, but inflammatory processes can also occur as complications, significantly increasing the pain.

The initial symptom of arthrosis is occasional, later permanent pain. It increases in case of movement or lifting and reduces during rest, but persists for even hours after increased physical activity.

Bechterew syndrome is a hereditary inflammatory spinal disease leading to increasingly severe mobility restriction and gradual calcification of the joints and ligaments between the spinal vertebrae. In advanced stages, the complete spinal column becomes ossificated. Our medicinal water and therapeutic mud supplemented with exercise and massagefacilitates the dissolution of the reduced spinal columnmobility.

The most common autoimmune inflammation of multiple joints is rheumatoid arthritis, occurring to 1% of the adult population, three times moreconcerning women. It includes chronic joint inflammation, pain and restricted mobility, causing significant deformities and movement constriction in the long run.

Among metabolic diseases, the best-known clinical picture causing joint inflammation is gout, caused by precipitated uric acid crystals in the joints. 1.6% of the population is affected and it is seven times more common in men. Chronic gout may lead to permanent joint deformities, causing damage to other organs too (kidneys, arteriosclerosis).

The heterogenic disease group called serogenetive spondylarthropathy commonly causes joint inflammation. Joint inflammations associated with certain bowel (Crohn, colitis ulcerosa) or skin diseases (psoriasis) or those appearing after certain infections (reactive arthritis) belong to this category. The most common member of the disease group is the Bechterew-disease (SPA), being the chronic inflammation of spinal joints.

In every disease group, the application of modern medical treatments (biological treatment) is very important, supplemented with balneotherapy.

Medical cures for the treatment and prevention of osteoporosis (osteoporosis)

Osteoporosis is the systemic, progressive metabolic disease of the skeletal system, characterized by decrease in bone mass and increased risk of bone fracture, due to the weakening of the bone structure. This affects approx. 10% of the population, but after the age of 50, this proportion is 30%.

Nowadays, the market offers numerous medications with bone-building effect, forming the base of therapy with appropriate calcium and vitamin-D supplementation. The prevention of fracture and falling is very important, by maintaining appropriate muscular force and using therapeutic equipment.

Heart and vascular diseases have been leading the statistics concerning diseases and death causes in developed countries for decades. Arteriosclerosis is the sum of disease processes that cause the thickening of vessel walls and loss of their elasticity, thus the circulation in the limbs deteriorates. Increasing with age, its occurrence is more frequent and certain risk factors (smoking, hypertonia, elevated lipid levels) may exacerbate it. Long term internal medical disorders are often accompanied by vessel complications; the best-known scenario (pain, sensory loss, wounds, eye and kidney disorders) is diabetes. As for autoimmune diseases (SLE, scleroderma), the rapid discoloration of the limbs may also be present (Raynaud syndrome).

It is estimated that every 7th couple have trouble conceiving worldwide, independent from the development level of the country. In 30-40% of the cases, the female or the male is the cause of childlessness, in 20-25% of the cases, both parties. There may be genetic or anatomical reasons, but most commonly hormonal and metabolic disorders (diabetes, thyroid or adrenal gland problems) are in the background, which may be aggravated by environmental factors (toxins, adhesives, organic solvents) and psychological problems. Acute pelvic inflammation occurs recurrently in some cases, despite antibiotic therapy which significantly increases the risk of infertility. The main cause of inflammation used to be chlamydia and gonorrhea infection, which are now present in one-third of the cases and a myriad of other bacterial pathogens have also appeared that lead to chronic disease due to pharmaceutical therapy often performed for an inadequate period.

In today's performance-oriented world more and more people are exposed to stress regularly, the persistence of which does not only cause psychological but also organic discrepancies.  Young, middle-aged men are the most vulnerable. Currently one and a half times more men die aged 35-40 and twice as many man aged 40-50 than in the 70s and 80s.

As a result of chronic stress a variety of symptoms develop, starting with changes in mood (fatigue, irritability) often accompanied by sleep disturbances. Most frequently cardiovascular problemsoccur (increased blood pressure and heart rate) due to the general deterioration of the vascular system metabolic dysfunctions may develop; the blood sugar and blood fat levels increase. Generalized atherosclerosis is the main risk factor of stroke. The occurrence of diabetes types I and II is more frequent, as well as of gastrointestinal and digestive problems due to the rapid, irregular mealtimes. Due to the sedentary lifestyle waist-, back pain, muscle ache, and decreased physical capacity also accompany the internal medical clinical picture.